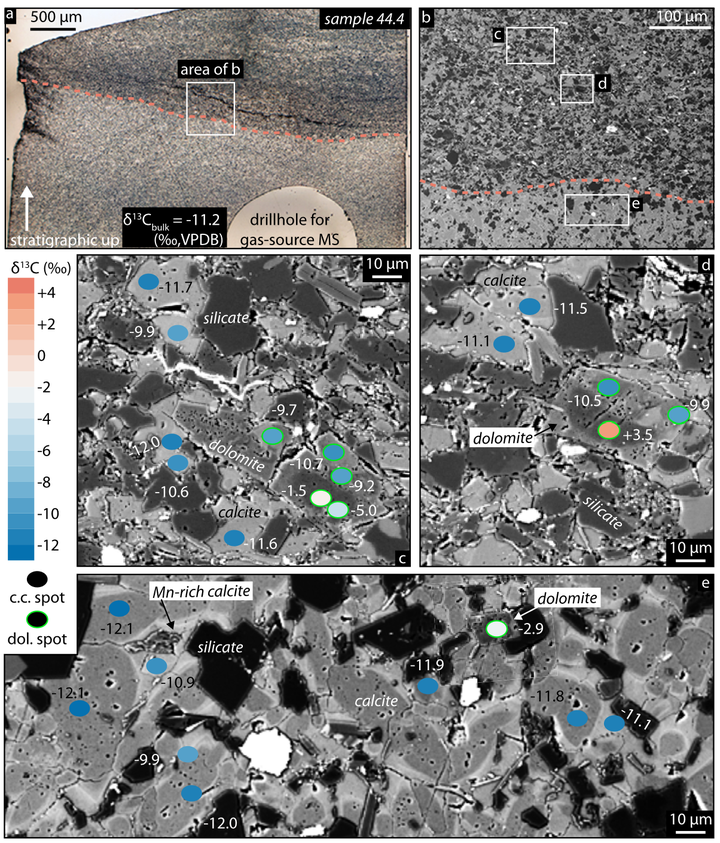 Ediacaran-aged (635–541 million years ago) marine sediments contain a large negative carbon isotope (δ13C) excursion, in which carbonate δ13C values reach −12‰ (VPDB). Known as the ‘Shuram’ excursion, many workers have interpreted this δ13C record as an unprecedented perturbation to the global carbon cycle, leading to speculation about a causal connection to the broadly contemporaneous rise of animal life. Others have interpreted the δ13C signal as a product of diagenesis, thereby minimizing its relevance for understanding the evolution of metazoans. Here, we present SEM imaging and in-situ δ13C and δ18O values measured by secondary ion mass spectrometry (SIMS) to assess these competing hypotheses in the Wonoka Formation of South Australia. Our results from the minimum of the excursion show that rounded sedimentary grains of calcite have δ13C values between −12.8 to −10.6‰ and δ18O values between −17.8 to −15.5‰ (VPDB). Euhedral dolomite that appears to have grown unimpeded in open sedimentary pore spaces also is present. These early-stage dolomites are interpreted as early authigenic in origin and have δ13C values that reach +5‰, requiring a formation fluid with a substantially different δ13C composition from basin waters or bulk sediment. Together, these results provide little evidence for the hypothesis that a late diagenetic overprint has generated the ‘Shuram’ excursion in the Wonoka. Instead, they suggest the presence of a large carbon isotopic gradient in the surface environment, with shallow waters capable of precipitating carbonates with very low δ13C (down to −12‰) and deeper shelf and/or marine pore waters generating carbonates with positive carbon isotope values (up to +5‰). Because negative isotope excursions of similar magnitude are found in widely dispersed Ediacaran basins, it is likely that this gradient was characteristic of shelf environments of this period and that a still-unknown global process led to the ‘Shuram’ excursion in shallow water carbonates.